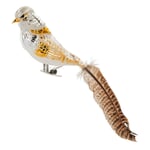 Traditional Lauscha Glass Pheasant
In stock, Delivery in 5-6 days
We regret to inform you that, due to Brexit, we are unable to accept orders from our UK customers.

According to popular belief in his East Asian country of origin, the pheasant with his colourful plumage stands for beauty, well-being, good fortune and virtue. In Europe, the bird was viewed as a symbol of the resurrection and love, while at the same time it was a frequently hunted, and a roasted pheasant was considered a priced delicacy. That being said, this colourfully painted glass pheasant sports a real pheasant feather from a breeding bird.

The Lauscha glass blowers or lampworkers originally considered the blown glass decorative figures a matter of pure form, because they owe their unique form to the process in which they are shaped with the help of the hot flame of an alcohol lamp into a two-part negative mould. The lamp today is a gas burner whose flame keeps the glass viscous and malleable. The moulds used today are the same as those used 100 or 150 years ago. Most are made of ceramic and must be handled carefully, because in order to preserve them they can't be overheated and must be cooled off at regular intervals. No more than 150 figures or ornaments can be blown in one batch. Solely the raw material used today is different from former times: instead of glass tubes drawn especially for this purpose, pre-fabricated bulbs made of colourless lime-sodium carbonate glass are used.

An Entire Flock of Birds.

Traditionally, animal figures and especially birds as allegorical figures with human characteristics have found their place in the Christmas tree. According to lore, there should be a symbol-laden encounter between a male and a female bird in the tree. However, we suppose it has very tangible reasons that the lampworkers are so fond of birds: The compact body of a bird is a good candidate for blowing in a mould. On one side of the glass bulb a delicate bird beak can be pulled drawn, and on the other side, the tail feathers can be attached. These used to be made from cut glass fibre, but in the 21st century, the craftsmen began to use real bird feathers.

Blow moulded glass, hand painted and decorated with a real pheasant feather. The bird rocks back and forth on two metal coils with a clip.
Length 17 cm, width 4 cm, height 24 cm. Weight 16 g.
More articles of the manufacturer:
Have a question?