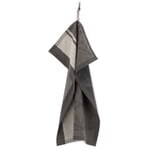 Tea towel Jacquard
Strips
In stock, Delivery in 5-6 days
We regret to inform you that, due to Brexit, we are unable to accept orders from our UK customers.

Besides fine natural materials, lively patterns and daring colour combinations characterise the table linen and bathroom textiles from Le Jacquard Français. It hadn’t always been like that: Until the 1970s, home textiles were primarily white. That’s why the weaving mill, initially founded in 1861 as a drapery business, originally produced a wide range of textile goods – made of cotton, linen and half-linen – in white – the more so since Le Jacquard Français set up its own bleaching plant in 1928. At the same time, the mill invested in acquisitions of modern Jacquard looms and specialised in weaving high-quality damask fabrics with the pattern visible on both the front and back. The Jacquard looms allow for a complex, automated weaving technique and the application of several different weaves for one fabric. The technical capability of the looms provides the set-up for motifs that are as complex as they are varied. Nowadays, the company operates on a fully integrated basis at its headquarters in Gérardemer: from spinning to weaving and refining to dressing and finishing. With 54 Jacquard looms, 120 employees and the experience of well over a century, Le Jacquard Français is now one of France’s traditional companies. The French Ministry of Economy awarded the mill Entreprise du Patrimoine Vivant (i. e. Living Heritage in English). Combining traditional handicraft and technological innovation is especially characteristic of the mill’s production processes – particularly evident in the dyeing process at Le Jacquard Français, and for a good reason.

In Style and Striking Colours. From Trousseaus to Fashion Accessories.

When Le Jacquard Français brought the famous designer Primrose Bordier on board in 1978, it marked a turning point in the brand’s history. Bordier broke with the conventions in home textile designs and breathed life into the traditional ornamentation. While home textiles came until then dominantly in plain white, his designs surprised with imaginative patterns and intense, bright colours. Le Jacquard Français invests again, this time in colour research, and brings a wind of change to the industry with its colourful collections. Its trousseau pieces become fashion accessories and style elements for interior designs – and Le Jacquard Français becomes an international player among textile manufacturers.
The French mill chooses high-quality, long-staple fibres for spinning. The fineness and superior quality of the resulting cotton and linen yarns are the essential factors when it comes to the intense colours and the shine and precision of the motifs. Le Jacquard Français received the Masters of Linen® label, a quality award for linen 100 per cent produced in Europe: from the harvest and the fibre up to the finished fabric.

89% cotton, 11% linen. Origin India and Portugal. Contains non-textile parts of animal origin: leather strap. Basis weight 300 g/sqm. Machine wash up to 40 °C without optical brighteners. Not suitable for tumble dryer. Jacquard woven and made up in France.
60 × 80 cm
Manufacturer:
Have a question?