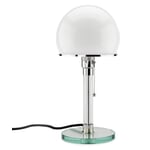 Table Lamp WG 24 by Wilhelm Wagenfeld
In stock, Delivery in 5-6 days
We regret to inform you that, due to Brexit, we are unable to accept orders from our UK customers.

There’s No Design but Wagenfeld Design.

“Don’t start from the chair, but from sitting, not from the glass, but from drinking, not from the jug, but from holding and pouring. Not from the lamp, but from the light and lighting.” Wilhelm Wagenfeld was one of the most influential industrial designers of his time, and, in Germany alongside Peter Behrens, the founding father of a profession that is now considered inevitable in almost every major manufacturing company. However, he struggled with the term, even rejected it. For him, talking about “design” revealed that the designed object threatens to be an original, more of a rare piece of art than an object of everyday use. What’s more, a manifest design might telegraph hints on the individuality of a designer personality behind the styling, and nothing was further from his mind than that. In 1924, working in the Bauhaus metal workshop under the direction of Moholy-Nagy, he created one of his most famous designs: the Bauhaus table lamp. The time at the Bauhaus and the design process resulting in that lamp is considered formative for his thinking. Nevertheless, he later attested the lamp a precarious closeness to the arts and crafts. The exceptions to this would be the inherent technology and final shape; throughout his life, he considered the lamp a well-turned-out accomplishment in these respects. He reckoned the lamp an artisanal piece, basically, because of the Bauhaus’ remoteness from industrial production: “His” lamp was no mass product and could never become one.