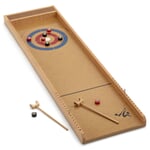 Table Curling “Kulling”
In stock, Delivery in 5-6 days
We regret to inform you that, due to Brexit, we are unable to accept orders from our UK customers.

Kulling is a Swiss variation on curling which is played on a tabletop. Two players or two teams try to push their own pucks (known as "kull") into their target area using a wooden slider. Like in curling, it's all about dexterity. The pucks, which have a metal ball in the middle, have to come to a standstill as close as possible to the centre of the target. If a puck rolls too far, it ends up in the penalty zone. Players are allowed to play against the perimeter and may push opponent's pucks aside with their own. Kulling is fun at home but is an ideal travel game, too. All parts can be safely stowed away in the top compartment, and the board can be carried using the practical carry handle.

Premium board games. From Alfaset of Switzerland.

It is the outstanding workmanship that makes Alfaset's board games so special. The Swiss manufacturer uses mainly native woods such as maple, birch, and beech and is fitting together the individual parts with fascinating precision; all elements are neatly bonded and the surfaces meticulously finished. In short: Alfaset's games are in a class of their own. And they also appeal to both, children and adults! The rules are simple and easy to follow, and success depends on luck rather than on talent. This is why sometimes players are being driven up the wall – but just as quickly back to the board again.
The games are made in the company's five own workshops near Lake Neuchâtel, Switzerland. To a large extent, Alfaset employs people with disabilities who work together with qualified carpenters.