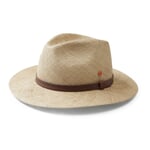 Straw Hat
Nature
In stock, Delivery in 5-6 days
We regret to inform you that, due to Brexit, we are unable to accept orders from our UK customers.

When Leonhard Mayser opened his “Hut Macherey” in Ulm in 1800, he would hardly have guessed that Mayser hats would one day be a global brand, with an annual production of 3.5 million hats in 1963 (a record output that is unsurpassed ever since). Although the production figures are far lower today, Mayser can still call itself a global brand. Based in Lindenberg in the Allgäu, the former “Small-Scale Paris” of hat fashion, Mayser sells its hats in 44 countries. Despite all the changes, the secret behind the company’s success has remained the same over more than two centuries: quality. While the design, purchasing and sales departments are still based in the Allgäu region, Mayser relocated its production in 2002. The brand runs its own manufactory in Slovakia now, staffed with personnel that was qualified in-house.