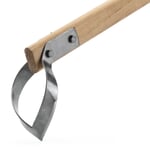 Stainless Steel Flat Cutter
Narrow
Currently not available
We regret to inform you that, due to Brexit, we are unable to accept orders from our UK customers.

We offer the flat cutter in two designs. In the wide variation, the blade’s slope can be adjusted in three ways; its position can therefore be accustomed to the height of the gardener. The shape of the birchwood shaft contributes additionally to ease of use; the shaft is rectangular, not round, and is easy to hold.

Weeding, chopping, ridging. A few examples of use.

It is the unusually formed blade that makes possible the diversified ways in which the flat cutter can be used. If you hold it with the tip to the soil, the soil can be thoroughly loosened and chopped; this can take place early in the year before sowing, or in the fall in preparation for the new garden season, when dung or lime needs to be applied. In this position, large weeds can also be easily chopped out. Turned 180°, the device can serve as a so-called hoe, as a digging or pushing hoe, moved away from your body over the soil; in an especially powerful way, you can tackle shallow-rooted weeds. The blade cuts under the roots of the weeds; it works wonderfully, for example, on sidewalks or paved garden paths. In the side position – the head of the tool is turned 90° and the long cutting surface of the blade rests on the soil – the instrument can be used to ridge up vegetables. Uncontrolled growth or larger shrubs of weeds can be "scythed," and less stubborn weeds can be cut down in lateral movements without much effort. Because you can cut through the roots, the parts of the plants above-ground simply remain lying as organic fertiliser.

This garden tool stems from a city east of Moscow, Sudoga. On the Datschas, owned by many Russian gardeners, these "flat cutters" are ubiquitous, because they can be used in unbelievably diverse ways, in vegetable patches and flower beds. The blade’s shape allows for a very gentle way of cultivating the soil without impairing the soil life. Processing depth should not exceed 15 cm when working with the flat cutter; in this way, the soil structure remains intact, and soil layers are not mixed or transposed. The air- and water balance in the soil remains intact; additionally, soil organisms find optimal conditions – which fosters the ideal conditions for plans to grow and develop.

Suitable for all types of soil (also heavy soil). Stainless steel blade and screws. Shaft made of birchwood of Russian origin.