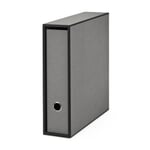 Slipcase Family Tree
In stock, Delivery in 5-6 days
We regret to inform you that, due to Brexit, we are unable to accept orders from our UK customers.

Discover unique products designed exclusively by Manufactum and made especially for us according to our specifications – you will find these products exclusively at Manufactum.

There is no wrong in saying that parents all over the world share the experience that the birth of the first child is the beginning of a more or less voluntary confrontation with one’s own past: the first postnatal indications of striking similarities (“she has your nose”), followed by the grandparental diagnosis of seemingly directly inherited foibles (picking one’s nose, fear of dogs). And later on, when the own children grow into somewhat difficult teens, one can no longer escape the impression that it is a miniature version of oneself that uses the unfair means that one once used to deploy versus the own parents. Then, at the latest, a deeper understanding of family continuities begins to dawn on you.
With the awakening interest, you look back at your parents’ and grandparents’ life and notice that probably a considerable part of what could have been asked and preserved was not asked and not preserved. All too commonly, the knowledge about the great-grandparents and the family members of their generation is already limited to birth and death dates. Yet, their lifes’ stories and accomplishments are irretrievably lost. The Manufactum Family Chronicle is a tool created to stop or at least alleviate the loss of a treasure that you can only discover in retrospect. The chronicle offers a cornerstone for newly founded families: It lays the foundation for writing the new family’s history while recognising the first child’s birth as the “zero hour”, so to speak. On the first go, the chronicle covers up to 50 people. If that won’t quite cut it, we offer an extension to the kit.

The underlying idea is simple: Document and collect in the present – and thereby give access to the family story in the future. The family chronicle is a matrix that helps you preserve information about names, dates and relationships. Doing so is a simple matter in the present but would be a lot more difficult or sheer impossible in the future. By filling information into the matrix, you can create a collection that allows future generations a deeper understanding and more personal view of their ancestors’ life than usual genealogical records. You’ll find the growing collection a cornerstone and powerful incentive for dedicating yourself to updating the chronicle. Next, you will quickly discover that the chronicle’s approach is identity-establishing and personally revealing.

The system is simple, flexible and amenable to your ideas and needs. You can use it intensively, but you do not have to document every milk tooth lost in epic breadth. After all, you won’t have to deprive your family life of things that still play a role in the daily routines in order to archive them. There is still time, and, one day, the meaningful objects will find their place as mementoes. Over the years, one thing will become apparent: Even if you document only the essential data on the life of your descendants and, as far as information is accessible, your ancestors, you make a chronicler’s contribution that will gain considerable value with increasing temporal distance.

Slipcase made of plywood, laminated paper and bookbinding cloth. In favour of the fit with the archive box, this slipcase is a little deeper than usual ones. H 34,5 × W 9 × D 35 cm. Weight 1.3 kg. Supplied without a folder.
More articles of the manufacturer:
Have a question?