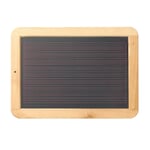 School Slate
Lined/Squared
In stock, Delivery in 5-6 days
We regret to inform you that, due to Brexit, we are unable to accept orders from our UK customers.

You might look long for school slates like these made from 3.3 mm thick Italian slate. And the lines were not printed. They were etched in the traditional way, filled in with red enamel and polished.

The landscape where the sedimentary Devon rock extrudes into the earth’s surface forms strange mountainous terrain with wave-shaped plateaus and gentle heights rutted with craggy valleys and cliff-like walls. That’s how the Rhine and Thuringia slate mountains look. "Blue Gold" as it is called in the German building trades, is used as facade cladding or roofing material in a geometry typical for the area, the famous "old German roofing". Along with the clay shale for construction in Sauerland (Fredeburg), on the Mosel (Katzenberg), in Hunsrück and in Thuringia, the familiar school and pencil slate is still mined.