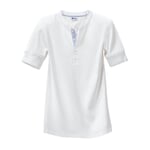 Schiesser Men’s Fine Rib Short-Sleeved Undershirt
White
In stock, Delivery in 5-6 days
We regret to inform you that, due to Brexit, we are unable to accept orders from our UK customers.

The knitwear with the finest possible vertical ribbing has a fabric weight of 190 g/m². The button plackets are reinforced with blue and white striped jacquard ribbons. The knickers come with wide waistbands and finely ribbed bands at leg openings to ensure a comfortable fit. For the undershirts, which look great worn as a T-shirt on top of jeans or other casuals, a narrow collar with finished outer edges of fine ribbing takes care of the perfect fit at the neck, the sleeves end in ribbed cuffs, and the backs of the shirts are reinforced with cotton panels.

A Long History in Modernity. Underclothing by Schiesser.

"Schiesser is Quality" – the history of the company from Lake Constance is a story of quality and innovation. Schiesser was already well known just 20 years after its founding: while at the Paris World Fair of 1900, the company’s founder, Jacques Schiesser, received the "Grand Prix" for his damask tricots. And Schiesser was always a hair’s breadth ahead of the competition: issues with the supply of raw materials were met intelligently and experimentally, for example, with the use of nettle or paper fabrics. The following Schiesser products are a revival of the past in two respects: Firstly, more than 60-year-old circular knitting machines have been repaired and returned to operation and, for this purpose, spare parts, whose production had long been discontinued, have been specially manufactured; standing at the Schiesser production site in the Czech Republic, they are running again now. Secondly, these machines are finally able to produce the fitted underwear designs offered here, which were once so popular in the first half of the last century, using the finest long staple Egyptian cotton.

100% cotton (fabric weight of 190 g/m²) produced in Greece. Contains non-textile parts of animal origin: mother-of-pearl buttons. Garment made in the Czech Republic. Back length for size 5 = 67 cm.
Manufacturer:
Have a question?