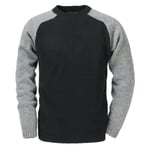 Men's Sweater with Raglan Sleeves
Black/Grey
Sold, No longer available
We regret to inform you that, due to Brexit, we are unable to accept orders from our UK customers.

The Harley of Scotland® label stands for first-class knitwear made from select yarn blends. The company goes back to Peter Harley, who, in 1929, combined his experience as a fisherman in the harsh waters around Orkney, Shetland and the Fair Isles with the local knitting craft and traditional patterns that he had come to know from these islands. With this knowledge, he started to produce and market knitwear under the name "Glenugie Knitwear". His son entered the international market in 1968 and 1973 established the name Harley of Scotland®.
The yarns are still made in the old local spinning mills, which work with various dyeing processes. They are incredibly light and soft and can defy even the often harsh weather conditions of the Scottish northeast and the Irish west coast. At the same time, they can still cut a good figure in the urban environment – which is not least due to the mixture of textures and patterns that form a perfect balance between old and new. Harley of Scotland® sweaters are always form knitted, which increases comfort and avoids the waste that occurs during cutting.

This sturdy, round-neck pullover contrasts light grey raglan sleeves with a black body. The neck, cuffs and waistband are formed from a wide ribbing.
Manufacturer:
Have a question?