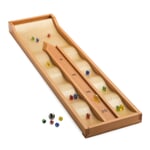 Marble Game Whoops
In stock, Delivery in 5-6 days
We regret to inform you that, due to Brexit, we are unable to accept orders from our UK customers.

Whoops – shooting for the groove.

With a skilful but not too forceful flick of the wrist, players shoot their colourful marbles along the board. The middle lane is the launch ramp where the marbles pick up speed and, after making a U-turn, roll over as many ridges as possible. Up to four players take it in turns to propel one of their marbles along the board. Three scenarios are possible: The marble can a) (as hoped for) stop in one of the grooves in the right or left lane (the further it gets the better), b) remain on the launch ramp or c) get stuck in the groove at the end of the ramp. The large metal ball is the joker – each player is allowed to use it once every game. With the joker, players can knock opponents' marbles out of the way or into the penalty groove, or bring their own marbles further along the board.

Premium board games. From Alfaset of Switzerland.

It is the outstanding workmanship that makes Alfaset's board games so special. The Swiss manufacturer uses mainly native woods such as maple, birch, and beech and is fitting together the individual parts with fascinating precision; all elements are neatly bonded and the surfaces meticulously finished. In short: Alfaset's games are in a class of their own. And they also appeal to both, children and adults! The rules are simple and easy to follow, and success depends on luck rather than on talent. This is why sometimes players are being driven up the wall – but just as quickly back to the board again.
The games are made in the company's five own workshops near Lake Neuchâtel, Switzerland. To a large extent, Alfaset employs people with disabilities who work together with qualified carpenters.

From 3 years. Board game with 16 coloured glass marbles and one metal ball in a pouch. Launch ramp and frame made of beech (from Switzerland). Lanes made of maple veneer (from Switzerland) and birch plywood (from Estonia, Finland). Marbles made of glass or metal. Fabric pouch. Height 6.5 cm, width 26 cm, length 96 cm. Weight 4.2 kg. A game manual is included.
More articles of the manufacturer:
Have a question?