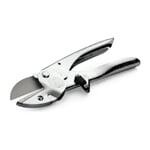 Löwe Anniversary Model Anvil Shears
In stock, Delivery in 5-6 days
We regret to inform you that, due to Brexit, we are unable to accept orders from our UK customers.

Like all Löwe shears, these also have an easy to change blade. If need be, you can get replacement parts from us, but the manufacturer also takes back his models for reconditioning.

A Handy Item For the Anniversary.
We had the idea many years ago: if one would emboss the tried and tested Löwe anvil shears made by the Gebr. Schröder GmbH with a pretty imprint, that would make them even more handy and better than ever. The anvil shears have turned 90 , which for the manufacturer, who can look back on 145 years of company history, is a good occasion to issue his classic tool with a vine imprint. And with the handles firmly in the hand, the shears don't slip at all and the work is easier to do

The principle of the anvil shears.
These shears were never so pretty, but they cut well from the beginning. The principle behind them was developed in 1923 by Gebr. Schröder GmbH in Kiel. It is not just the combination of a blade and a base (the anvil), it's the right materials. The blade must be extermely hard and retain it's edge, but the anvil must have a little give. Therefore it is made of an aluminum and zinc alloy. Anvil shears are used to cut the harder, tougher branches and are suitable as a bypass pruner. Since they require less force and are technically superior to other shears, they are the shears of choice for pruning.
Have a question?