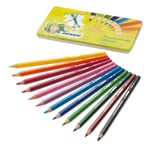 Jolly Kinderfest Coloured pencils
In stock, Delivery in 5-6 days
We regret to inform you that, due to Brexit, we are unable to accept orders from our UK customers.

The history of the firm of Brevillier-Urban goes back quite a way. In 1800 Ignaz Urban in Vienna opened a smithy, and in 1823 Carl Wilhelm von Urban founded a screw factory. In 1925 the two firms started producing stationery by purchasing the former Zeus factory in Graz. That became the Brevillier-Urban stationery factory.
The Jolly brand was introduced in 1965, and a little while later they coined the term "kinderfest" for these coloured pencils. "Kinderfest" or "child-resistant" means a shock-resistant coloured pencil which bravely stands up to the turbulence of the everyday life with children. The pencil features a robust wooden mantle and a high pigmented coloured lead that is glued especially firm and durable, hence its shock resistance. In addition, the ergonomics of the pencil are adapted to the fine motor skills of children. The term "kinderfest" is not just recognised in Austria where almost every child in the last 50 years grew up with it. The term spread untranslated to non-German speaking countries like Italy, Slovenia and Sweden – a foreign word as a hallmark of quality.

12 coloured pencils in a metal case. Length 17.5 cm.
More articles of the manufacturer:
Have a question?