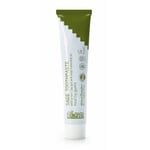 Green Clay Toothpaste
Sage
In stock, Delivery in 5-6 days
We regret to inform you that, due to Brexit, we are unable to accept orders from our UK customers.

Clay gel cleans the teeth thoroughly but gently, without the use of any abrasive particles. The ingredients in clay have an absorbent effect, and, furthermore, work to balance oral pH levels. Demeter-monitored grown herbs and essential oils lend the gel its freshness. Toothpaste made from clay contains neither fluorine nor saccharin nor foaming agents, which is why it does not foam!

The ancient Egyptians knew very well that some kinds of earth possess the power to cleanse, and of these, they made good use! The fine particles in clay, for example, have a very raw, uneven surface which lends it its greater binding capacity. Liquids and firm substances are therefore apt to adhere easily to clay so that a major share of these materials is absorbed. When clay dries, the so-called "capillary suction power" sees to it that water is pulled into the empty spaces. Known also as mineral clay, because of its high mineral content, clay can be found in a variety of compositions. Along with important trace elements such as zinc, selenium, copper, lithium and manganese, as well as many minerals like silica, calcium, potassium, iron, magnesium or titanium, there are also oxides of magnesium, copper and iron, the concentration of which accounts for the variety of the earth’s colours: from white and green to pink and brown.

The Argital green clay is of marine origin, its green tone revealing the divalent iron it contains. It is mined in southern Sicily, where it is finely ground and dried in the sun. In the form of a gel, clay can be the basis of toothpaste, peeling products and masks as well as other personal care products. The addition of organic herbs and essential oils, as well as cold-pressed plant oils and spring water, serves to expand clay’s already wide range of applications and effects even further.