Goethe Finger Ring Made of Gold 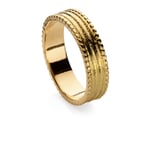 Goethe Finger Ring Made of Gold
Ø 18 mm
Sold, No longer available
We regret to inform you that, due to Brexit, we are unable to accept orders from our UK customers.

Lost and Found. Traces of Goethe in Weimar.

The hunt for clues began in a Danish antiquarian bookseller's shop. Gisela and Detlef Menard turned up a copy of the "Goethe Gedenkblätter Weimar", published in 1921 by the Goethe-Nationalmuseum in Weimar. In the book, they found an illustration of Goethe's wedding rings. He had them made by the Royal medalist, Friedrich Wilhelm Facius, from 750 gold according to a design of his own when he married Christiane Vulpius in 1806 after living with her for 18 years.
During a visit to the Weimar master engraver Manfred Pennewitz, the Menards found out that after Goethe's death in 1832, the rings were kept in the Goethe-Nationalmuseum in Weimar until 1913 when they were stolen. The rings have not been seen since then. Based on an old illustration, Manfred Pennewitz had produced the rings by hand years ago, but when the rings were stolen from his shop's display case, he decided to manufacture the rings solely upon request.
After the death of the engraver in 2013, the jewellery makers from Steinfurt suggested to the museum in Weimar they could take over the production of the Goethe couple's jewellery. With the aid of 3D printing techniques, a model maker produced the first model on the basis of the illustration in the "Goethes Gedenkblätter Weimar" for the Menards. Based on this model, a foundry in Pforzheim casts the slugs for the rings today. Subsequently, the rings are surface treated in Steinfurt. The relief on the surface of the rings shows two parallel running lines, bordered on each side by a ring of half beads. The rings were originally engraved with the day of Goethe marriage proposal on October 14, 1806. In the ring offered here, there is no engraving.

Menard. When Looking for the New, Don't Forget the Old.

Gisela and Detlef Menard started a business to distribute antique style jewellery in 1981 in Steinfurt, a town north-west of Münster, in North Rhine-Westphalia. At the beginning of the 1990s, they expanded their range with a new line marked by simplicity. The company with the name affix "Passé & Aktuell" (i.e. "Historical & Contemporary") stands for a certain philosophy: when looking for the new, don't forget the old. For example, the Menards use established manufacturing locations like Pforzheim, where most of their collection has been produced for more than 20 years. However, a few pieces come from workshops in neighbouring countries in Europe.
The Menards' name several reasons for their decision to keep the production in Europe and not to relocate in Asia (unlike many other manufacturers): first of all the "exceptional craftwork training" and the resulting quality of the sophisticated products, next to the short delivery distances, and, last but not least, the strict environmental regulations in Germany. "We understand sustainability as an integrated concept and challenge we accept", they explain. Procuring raw materials increasingly from sustainable sources is part of that commitment, too.