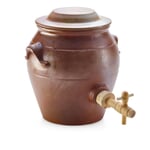 French Salt Glazed Vinegar Jug
In stock, Delivery in 5-6 days
We regret to inform you that, due to Brexit, we are unable to accept orders from our UK customers.

You will need three things to accomplish the miracle of vinegar fermentation. Firstly, a suitable vessel made of stoneware with a tightly fitting lid. Secondly, the Acetobacter strain of vinegar bacteria which will (thirdly) convert the alcohol in the wine of your choice into vinegar.

Salt Glazing is the Key.

This vinegar jug is thrown by hand in a pottery in Burgundy from especially greasy black-grey clay which is processed in a pit on-site in the firm. The firm has cultivated a particular form of pottery making, salt firing, which requires a kiln that has been equipped with openings in the roof and an open fire pit. At temperatures ranging from 1,200 –1,300 °C an oxygen reduced atmosphere is produced. When they have been thoroughly dried the raw clay vessels are glazed on the inside with a standard glaze, placed in the kiln and covered so that the salt glaze is only deposited on the outside of the jugs. As soon as the kiln is up to temperature common salt is thrown in the kiln, in this case Sel de Guérande from the Brittany. The salt crystals burst in the high heat and evaporate. The salt vapour is deposited on the clay where it combines with the sodium and quartz in the clay as silicate. In this process, known as vapour glazing, the glaze is applied after firing has started and develops very individually during the firing process. A salt glaze takes at least ten hours to complete, and at the end of the process, no one glazed surface resembles another.

salt glazing is a craft. Please bear in mind that, with this type of manufacture, not two jugs will look alike and that the colour of the glaze may vary from what is depicted in the picture.

Made of salt glazed clay, thrown by hand on the potter's wheel. Volume 3 l. Height 22 cm, Ø 18 cm. Weight 2 kg. Comes with a detailed manual.
Manufacturer:
Have a question?