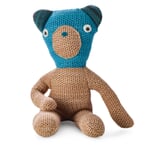 Fred the Bear
Sold, No longer available
We regret to inform you that, due to Brexit, we are unable to accept orders from our UK customers.

Rich in Imagery and Full of Character. Stuffed Animals from Berlin.

These colourful stuffed animals from Teenytini are the result not only of deliberate decisions of applying best practices but the heart and gut play a major role as well. When designer Julia Lange sits in front of a white paper and starts to work with her pencil, she comes away with a whole roster of new characters for her off-beat band of rascals. She then picks out those to whom she can relate immediately. It's important, "that I can visualise the animal in three dimensions and have an inclination to take the next step, namely to pick out the material", Lange explains. A gut decision, as she says.
The material used for the animals is just as much a matter of intuition: In her Berlin studio, the trained designer assembles the fabrics with an old knitting machine using punch cards. Sometimes she designs an entirely new pattern for an emerging protagonist while relying on her pattern inventory another time. She collects samples of material in a folder, like a recipe book, and decides on the colours and how a pattern is to be knit, thereby creating an archive which enables her to reproduce certain patterns exactly or invent a variant.
If the material and the drawing are in accord and Julia Lange can see an animal in the fabric, she goes into the three-dimensional design phase. Coaxing the character from paper to fabric, that is, to give the animal a gestalt, is the most difficult step for the designer born in Lübeck. Sometimes the idea is very concrete, and the process lasts just a few hours until the stuffed animal is sewn together, filled and shaped. But sometimes she starts out with a carefully considered decision based on an idea, and she finally rejects it because it doesn't feel right. For every model, she thinks about whether the new entrant will fit in the family. "At a certain point, the animal is born", and receives a name. For instance, the dino was named Werner; the little elephant became Elmon, the owl Earnest, and the seahorse is called Smutje, named after the German nickname for a ship's cook.

Fabric made of cotton. Filling made of maize fibre and virgin wool. Height 37 cm. Weight 140 g.
Manufacturer:
Have a question?