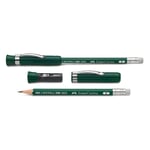 Faber-Castell Pencil with Cap
In stock, Delivery in 5-6 days
We regret to inform you that, due to Brexit, we are unable to accept orders from our UK customers.

Faber-Castell: the 9000 Series. It Gets No Better.

The most famous pencil of all called the ”Green“ in Germany, officially the 9,000. It turned 100 in 2005. We present it here in a special edition to be tucked into the shirt pocket, with a holder and extender that protects the lead and conceals a sharpener.

”A pencil – if you should produce it from scratch! Imagine humanity is gone, and you have to make a pencil yourself – it’s magic!“ (Arno Schmidt)

The history of the modern pencil begins with the discovery of the first English graphite mines in the 17th century. However, with success came a problem: The pencil leads were cut from massive material, and the resulting pieces were a luxury. That changed when the Frenchman Nicolas Jacques Conté and the Austrian Josef Hardtmuth developed a ceramic process to produce pencil leads. At the end of the 18th century, they began to mix graphite dust with clay and fired the leads in an oven, with the amount of clay and length of time in the oven determining the hardness of the lead. The advantages of this mixture made history: With the high level of stability, it became possible to write with a vertical tip, with satisfying smear resistance, that was relatively impervious to fading. And a welcome opportunity for the writer emerged: upon sober reconsideration, one could erase what one had written.