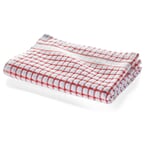 Drying-Up Terry Cloth
Red
In stock, Delivery in 5-6 days
We regret to inform you that, due to Brexit, we are unable to accept orders from our UK customers.

Speed Up the Dish Drying.

A terry towel seems an unusual sight in the kitchen at first. Although everyone praises the high absorbency of terry towels in the bathroom, one usually looks for them to no avail in the kitchen – although the task is the same in each case. At best, a terry towel for the hands hangs there on the hook, but it is usually much too thick for dishes. An extra-fine, absorbent terry towel, which has precisely the right thickness to dry crockery (even in large numbers from any family party), was presented to us by the Waldviertel weaving mill Herka. We have enthusiastically included the long-sought-after towel in our assortment and can now offer it to you in three colours. For your glasses, we still recommend a pure linen glass cloth.