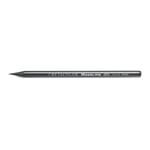 Cretacolor Monolith Graphite Pencil
(6 Pieces)
In stock, Delivery in 5-6 days
We regret to inform you that, due to Brexit, we are unable to accept orders from our UK customers.

One monolith – the "Monolith". Without wood. Graphite only.

A piece of graphite in pen shape. Shorter than a normal wood-cased pencil, but twice as heavy and comfortable to hold, with the perfect balance which will stay the same even after the pencil has been reduced to only half of its original size. Graphic designers know the pure graphite pencil and use its highly opaque tip for drawing and hatching. The harder versions (HB, 2B) can also be used as a perfect, soft and smoothly functioning writing instrument. In addition: This heavy item with the clear varnish coated surface is smooth to touch and attractive to the eye. The pencil can best be sharpened with sandpaper. Sharpening it with a pencil sharpener requires extreme caution. The graphite comes off in very fine flocks and, after only very little loss of material, the pencil can already be used again for writing and drawing.

Since 1790: Pencils made in Burgenland, Austria.

Cretacolor is one of the Austrian heirs of the famous imperial and royal "Koh-I-Noor" group founded by Josef Hardtmuth. The graphite pencil described here is made in Hirm in the Austrian Burgenland in one of the former Koh-I-Noor production plants.

"If one should make a lead himself! Imagine mankind disappeared and you have to make a lead! – magic!" (Arno Schmidt) The name is misleading. A lead does not contain any lead. This only applied to its predecessor in the 15th century. Dürer, for example, used lead-alloyed or tin-alloyed leads. The history of the pencil as it is today, only began in the 17th century. At that time the English graphite mines were discovered and mining activities began. Graphite is predestined to be used as pencil leads due to its solid body structure (the lattice layers of the graphite slightly slide away from each other when under pressure). The graphite leads sawn from one piece were real treasures. This remained the case until the end of the 18th century, when the Frenchman Nicolas Jacques Conté and the Austrian Josef Hardtmuth developed a method to produce graphite leads ceramically. They mingled graphite dust with clay and baked the leads in the oven. Here, the hardness of the lead is determined by the amount of clay and the firing time. The grade is indicated – from soft to hard – with the acronyms B (black), HB (hard-black), F (firm) und H (hard), whereby the B and H variants are further differentiated by the numbers 2 - 9 (the higher the number the softer or harder the lead).

Pure graphite pencil without wooden case. Comes in a tin case. Grade HB (medium), 2 B (soft) or 8 B (very soft). Length 14.5 cm. Weight 10 g.
More articles of the manufacturer:
Have a question?