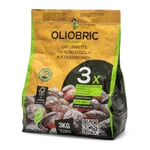 Charcoal from Olive Pips
In stock, Delivery in 5-6 days
We regret to inform you that, due to Brexit, we are unable to accept orders from our UK customers.

In Germany alone during the BBQ season, some 300,000 tonnes of charcoal and briquettes made from wood are consumed. About two-thirds of the raw material used for this is cleared under questionable conditions from the tropical rainforests of South America. Often, imported timber from Eastern European beech forests is destroyed in the mass production of cheap charcoal, whose performance characteristics leave a lot to be desired. This product is completely different in this respect, since it is obtained from natural waste products from natural resources.
The Greek briquettes are made by thoroughly pressing all the olive pomace, pips and skins left over from the industrial production of olive oil. They are then charred to make charcoal, and mixed with water and natural starch to form briquettes. Heat energy from olive residues has been used in Greece for a long time, and traditionally, they were burned as pellets in the oven. These briquette light quickly, burn for a long time, and retain an even heat over a number of hours. When burned the briquettes are odourless and do not affect the taste of food being cooked. There is also very little smoke, even when fat from the grate drips into the embers from time to time. This means that there is no need to use disposable grill trays or aluminium foil.
Our supplier is in partnership with a family business in Kalamata, the largest single olive growing area in the European Union, located in the south-west of the Peloponnese peninsula in Greece. As a certified manufacturer of olive briquettes, the company buys the natural waste from olive oil production from small-scale farmers in the region, and processes it further.