Candle with Channels Made of Stearin 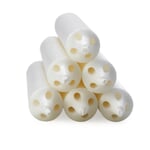 Candle with Channels Made of Stearin
(30 items)
In stock, Delivery in 5-6 days
We regret to inform you that, due to Brexit, we are unable to accept orders from our UK customers.

The “Kanalljus” (i. e. channel candle) comes from the house of Liljeholmens, in Sweden, where quality candles have been produced since 1839. The Swedish manufacturer produces the candles exclusively from stearin of animal origin, i. e. without palm oil. Each candle features four channels around the wick for absorbing any surplus of melted wax. The effect: the candle burns with a majestic calm, while its large bright flame gives an almost regal light, producing hardly any soot.
Initially, this candle design came up as an answer to a specific problem in churches: The flow of air caused other candles to drip incessantly until they melted away. In contrast, the “Kanalljus” hardly flickers or drips. With its relatively high melting point, the stearin burns down while leaving the candle with a rather sharp, even edge, avoiding one that tilts and begins to drip. Additional benefits of the high melting point of stearin: Even high ambient temperatures do not cause the candle to bend – its shape remains stable. After being extinguished, the liquid wax solidifies very quickly, and there is no afterglow of the wick.