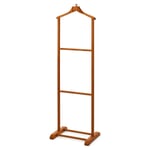 Beechwood Valet Stand
In stock, Delivery in 5-6 days
We regret to inform you that, due to Brexit, we are unable to accept orders from our UK customers.
Note the bulky goods surcharge

In our quest to guarantee you the best possible reliability and functionality in products, at times there is the need to be inventive: our team develops tailor-made solutions in-house or recommends product upgrades corresponding to our guiding principles to associated manufacturers.

Of modest form. Our "Valet Stand."

One – admittedly insufficient – replacement for the domestic worker, who looks after (at least in the case of the taciturn butler in British Boulevard Comedies), even during evening hours, discarded clothes with custodial and regulating intention. The same is done by this valet stand, which we have produced, according to our specifications, in Italy. This clothes stand of modest form, made from massive beechwood, is, from the standpoint of care, maintenance and order, in comparison to the next best chair, the more reasonable alternative. Shirts and sports jackets, jackets or coats can be placed over night on the shaped hanger; pants, belts and a tie can rest on either of the two clothes rails.