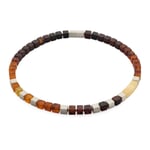 Amber Cubes Necklace
In stock, Delivery in 5-6 days
We regret to inform you that, due to Brexit, we are unable to accept orders from our UK customers.

A Circle of Amber.

It runs through the entire gamut of shades of amber. The combination of polished amber stones with matt silver cubes, separated by narrow little silver spacers, wich lends them some optical latitude, creates a necklace that bridges traditional and contemporary design. The necklace is a good example of the way that fossilised resin can be up-cycled: the cubes have been pressed from amber remnants, but the expressive power of amber is retained.

It oozed out of the tree trunks 50 million years ago in the subtropical forests that covered what is today Scandinavia and quickly became fossilised. At the time it was just tree resin, but then it became "amber", "Bernstein" in German, "Barnsteen" in Dutch and "Bursztyn" in Polish and has shown what it could do since then! The Roman poet Ovid admired it 200 years ago as "tears of the gods".The coveted "Northern Gold" was transported along the "Amber Route" from the Baltic to the Mediterranean where the "combustible stones" ("bernen" means "burn" in Low German) were used as fuel, incense substitute and choice stones for jewellery. From the rosary beads to the lore of medicine in the Middle Ages which ascribed healing powers to Baltic amber, to the lost "Amber room" of the Catherine Palace, near Saint Petersburg, to the use for jewellery today, the value attached to the "tears of the gods" continues. Natural amber is found in countless shades, from white to yellow and red, to dark brown.

Amber. The Gold of the North.

Amber impressively demonstrates what a steep career a simple tree resin can have if given a little time. What dripped as the resin 50 million years ago from trunks in subtropical forests (that covered what is now Scandinavia), petrified afterwards and was finally admired as the “tears of the gods” by the Roman poet Ovid merely 2,000 years ago. In those days, the highly coveted “gold of the north” found its way from the Baltic to the Mediterranean on the “amber roads”. Resourceful traders sold the “combustible stone” (“Bernstein” in German, the Low German “bernen” means “to burn”) as fuel, incense substitute and exquisite gemstone. Indeed, when you consider that its applications range from rosaries and medieval medicine, which attributed healing powers to Baltic amber, to the lost Amber Room and the modern set gemstone, there is no other conclusion: The appreciation of the “tears of the gods” is unbroken. Another intriguing aspect of the natural substance: amber comes in numerous colour variations ranging from white to yellow and red to deep dark brown.